The pictures are taken from the book “Guida alla Natura di Capo Milazzo” by Carmelo Isgrò. The book is available in bookstores and on the website www.guidaallanaturadicapomilazzo.it
It is possible to make excursions to Capo Milazzo with the biologist Carmelo Isgrò (author of the book) by sending an email to info@guidaallanaturadicapomilazzo.it or calling +393492637838 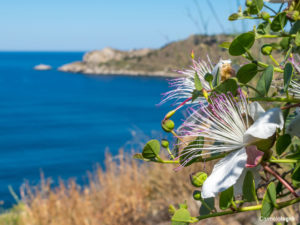 This trail is located in the end of Milazzo Cape. It begins near the Torre Longa and leads to the beach where the ruined buildings of the ancient “Tonnarella of Sant’Antonio“, one of the seven tuna factories of Milazzo.

Continuing the path we see the remains of “Palombaro Tower” where the low mediterranean scrub characterizes the landscape. Walking along a staircase, you will come to an amazing panoramic view from where you can admire breathtaking views and the characteristic Mediterranean flora and fauna. 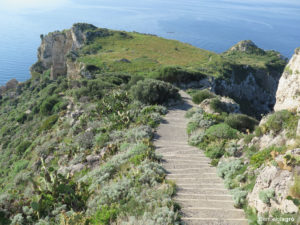 From here starts a long staircase that descends to the beautiful “Lake of Venus“, located at the extreme tip of the peninsula, where you can admire the Rock of the Portella (or “Artichoke“), which shows the signs of the erosions caused by the continuous banging of the waves.

To its right is the charming “stone face“, a natural sculpture made in the white rock.

After the “Punta messinese” there is the cave “Woman Leg”, which draws its name from the shape of a rock that, from the vault of the cave, plunges into the sea.

Along the way there will be a chance to photograph the elegant white flowers of the caper plant, which also lives in the ancient walls of the fortified citadel, with which the Baron also shares the dunes and the tunnels of wild rabbits. 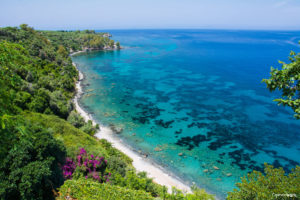 Here is a trail that follows the coastline eastwards to “Punta Mazza“, a must-see for the naturalist’s excursion. The geological origin of Capo Milazzo is particularly clear in this place. In fact, it is possible to observe the rocks and stratification of marine sediments dating back many millions of years ago: the fossils of shells and corals are proof of it.

In “Punta Mazza” and especially along the rocky cliff, which on one side steeply falls on Rinella‘s shore, vegetation has suffered, less than in the other places, the effects of human activity.

So you can admire a lush Mediterranean scrub characterized by lentis, euphorbia and broom. Noteworthy is the presence of some species of wild orchid, including Ophrys apifera and Ophrys sphegodes subsp. Panormitana, endemic of northern Sicily. 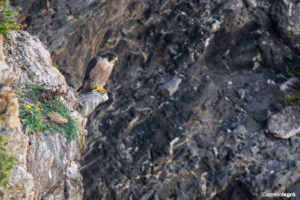 Taking the path again and continuing in the opposite direction, at the end of the olive grove you can see a rocky hill on which you can see the ancient lighthouse, still important for navigation.

Here you can see many species of birds during the migration period, including the grey heron (Ardea cinerea), which sometimes stops at Milazzo for a few days.

Nesting on the underlying rocks, is the kestrel (falco tinnuculus); It is easy to spot it for its tails and its sudden hits on the prey.

The path runs along the dry walls that follow the track throughout its length. Continuing along the path we find a detour leading to the “funtanedda” where you can see the water flowing from the wall. 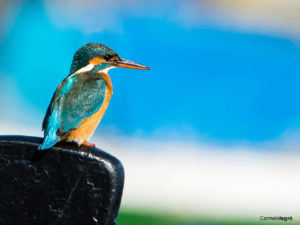 Going forward, you get to the “Manica”. From this point begins the path leading to “Monte Trino” and with trekking shoes you can walk it completely without great difficulty. In this part of the Promontory landscape, vegetation, soil conformation, assume very strong character. 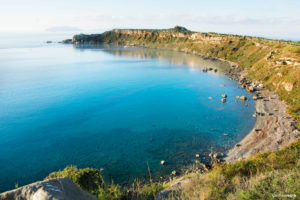 At this point you can arrive either from the path just described and directly from the paved road and allows you to admire one of the most beautiful views of Sicily: to the north the tip of Capo Milazzo framed by the seven Aeolian Islands; To the south the Sicilian coast with the mountain ranges of Peloritani and Nebrodi, from Capo Rasocolmo to Capo Calavà and Capo d’Orlando, with the imposing Vulcano Etna; To the east the Gulf of Milazzo and west to the Gulf of Patti.

The slopes of Monte Trino, like most of the Capo, have been terraced and used as olive trees. It is possible to observe very ancient olive trees, with their canopy low due to exposure to winds and with rough and twisted trunks covered at the base by dense wild bushes. Another centuries-old plant is the Carrubo (Ceratonia siliqua) cultivated among olive trees and spontaneous, along with the “olivastro“, on the near rocky slope.