In the city center we find the church of Carmine previously occupied by two small temples dedicated to Madonna of consolation and St. Philip of Agira. 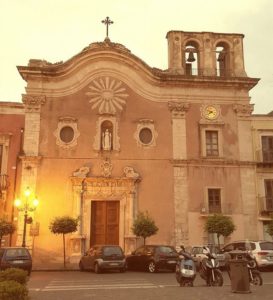 Going up to the “borgo” we find the sanctuary of St. Francesco di Paola, the only one in Sicily. It was founded by St. Francesco between 1465 and 1467 the period of his residence in Milazzo. During construction, the Saint performed many miracles, some of which are still visible. The temple was radically restored in the eighteenth century with an elegant facade and a spectacular staircase.

Adjacent to the Sanctuary, the convent, now used as a school and Carabinieri barracks. Many works of art in its interior: the beautiful wooden chapel, altar dedicated to Jesus and Mary, a Madonna and child, work of Domenico Gagini, XV century, and six paintings of Letterio Paladino (1691-1743).

Other important monuments are the archaeological museum opened in april 2010, the Antiquarium of Milazzo is housed in one of the most prestigious establishments, from the historical and cultural point of view of the city. The esat wing of the “Spanish quarter“, built in the sixteenth century (Piaggia is dated 1585 and attributes the project to Camillo Camilliani) in defense of “Citadel” rapresented today from the heights dominated by the Castle. 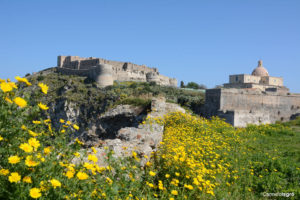 Through an unbroken sequence of 10 Exhibition Halls, equipped and enriched, the Antiquarium proposes an overall interpretation of the date provided by the archaeological research conducted on the Milazzo territory after World war II to today. The route is marked along the “line” of the time, according to an order that alternates contexts of finds from inhabited, in contexts of burial artifacts.

And Trifiletti Theater which was built in 1911 and designed by Letterio Savoja, on the initiative of Stefano Trifiletti, respurceful entrepreneur Who aimed to create a multi-purpose structure able too accommodate the most varied forms of entertainment.
Opened on June 29, 1912, it covered an area of over on thousand square meters with 47 boxes and a room with three hundred seats.
From 1912 to the seventies it has passed the greatest interpreters of opera, drama and vaudeville. Among the protagonists of the great plays Emma Gramatica, Nanda Primavera, operetta queen, and Angelo Musco.